In the Philippines, we always have the 1st of November declared as a holiday. For this year, we had October 31 and November 1 declared as “non-working holidays”. Of course, most of the Filipinos, including me, took the 30th of October as a “self-declared” holiday which gave me a five day respite from work. 😀😀😀

… And off we go to my home town province where I was born, Manaoag (“mana-wag”), Pangasinan (“pang-gasinan”).  Manaoag is located about 200 kilometers north of Metro Manila via North Luzon Expressway (NLEX) and Subic-Clark-Tarlac Expressway (SCTEX) going through Tarlac-Pangasinan Expressway (TPLEX). It’s about 3 hours drive from Metro Manila. One of the places to visit in Manaoag, specially if you’re a Catholic, is the Minor Basilica of Our Lady of the Rosary of Manaoag.

The Manaoag Church was formerly called “The Chapel of Santa Monica” in  the 1600s before it was named as “The Shrine of our Lady of the Rosary of Manaoag”.  Believe it or not, Manaoag was originally called as “Santa Monica”.

On weekends, thousands of Catholics visit the shrine to attend mass and have their cars/vehicles, and other things blessed. The center of devotion is the Lady of the Holy Rosary, which is also known as “Nuestra Senora de Manaoag” or plainly called “Apo Baket”, which means “Divine Goddess”. Catholics believe that the image of the Lady of the Rosary of Manaoag possesses miraculous powers.

“Pilgrimages reach their peak during Lenten and Easter seasons, during the month of May and October during the feast of Holy Rosary. Before the Dominician arrived, the Augustinian missionaries put a the Visita of Santa Monica, (the former name of manaoag), which they visited from Lingayen. As early as 1600 the Augustinians had put a modest chapel where the cemetery is now located. It was turned over to the Dominician in 1605 and was served from Mangaldan.

The first Domician priest to work in Manaoag mission was Fr. Juan de San Jacinto, O.P who was the curate of Mangaldan. It was not until 1608 that Mangaldan mission was formally accepted by the provincial chapter of the Dominician order. In 1610.

Fr. Tomas Jimenez, O.P. took over the mission community was transferred to the present site on a hill. A large church was commenced in 1701 under the sponsorship of Gaspar de Gamboa and his wife Agata Yangta, wealthy residents from Manila who transferred to Lingayen.

An expansion of the church began in 1882 was frustrated by the earthquake of 1898 and the whole church with is treasures was destroyed by the fire lighted by the revolutionaries in May 1898.

The miraculous image of the Virgin of Manaoag was narrowly missed destruction; it was found abandoned behind the church, and from June to October had to be kept in Dagupan for safety. Invited by Fr. Mariano Pacis, a diocesan parish priest of Manaoag, the Dominicans returned in 1901.

Under the aegis of the Order, the church began in 1882 was finally completed to a large extent in the years 1911-1912; the central retablo (altar of Virgin) was completed by the famed Tampinco studio in Manila. The transept (the arms of church) was completed in 1931-1932.

The Dominicians ceded all their Pangasinan missions to the mitre (i.e to diocesan clergy), with the exception of Manaoag. Spiritual administration of the shrine in perpetuity was given to the Dominican Order by the Holy See in 1925.

The image was canonically crowned in 1926. It means that the Church through Holy See officially recognized and proclaimed that the Lady of the Rosary of Manaoag had granted favors and blessings through her devotees through the centuries.

Since December 8, 1972, the Shrine of our Lady of the Rosary of Manaoag has been under the care of the Philippine Dominican Province.” (excerpt from Minor Basilica Manaoag website)

The Shrine of Our Lady of the Rosary of Manaoag was declared a Minor Basilica by Pope Francis on October 11, 2014.

A valuable tip to those who plan to go to the Minor Basilica of our Lady of the Rosary of Manaoag, visit the shrine on weekdays to enjoy the place as you will find it “jampacked” with pilgrims on weekends and holidays, specially during the Lenten Season. 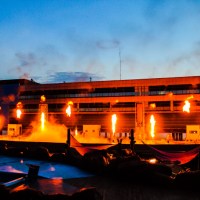