“Hades” was the Greek word for “Hell”… A biblical place sometimes called the Abyss, a no man’s land, where all those perished with mortal sins go. A place of eternal fire, agony, and torment which most believe to be the devil’s home.

In the Philippines, we are all familiar with a “hellish” place called EDSA, the acronym for “Epifanio Delos Santos Avenue”. It is one of the major roads leading to the country’s business district in Makati. Like the Greek’s Hades and the biblical Abyss, EDSA is a place of torment and agony… A place where toxic fumes seem to be eternally in the air; a UFC Octagon where some duels where fought to resolve traffic altercations; a long and winding road where “cowboys” point their guns to unarmed motorists for a minor infraction; an arid desert where vultures wearing uniforms wait to prey on motorists; and where mechanical beasts suddenly appear driven by undisciplined dull-witted knights.

Starting at 6 in the morning till 9AM and at 5 in the afternoon till 8PM (the “rush hours”), EDSA “magically” turns into a large parking lot where vehicles become like turtles running at the pace of a tired, old, and dying snail. Ill-maintained radiators become hot and engines stall… Ill mannered drivers curse and swerve without caution, and every where, you will hear the mechanical beasts blowing their horns as if by doing this, the heavy traffic will move.

Almost every day, we have to go through this nightmarish existence of spending two to three hours in EDSA just to travel about 20 kilometers (12.43 miles). During rush hours, EDSA has a deluge of buses, cars, motorcycles, and swarms of taxis and rented vans which turn its 6 lanes in either direction into 8 lanes.

EDSA is hell… EDSA is an abyss… It is the Hades in the Metro! 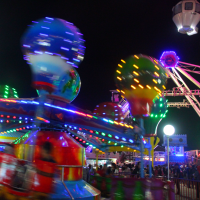